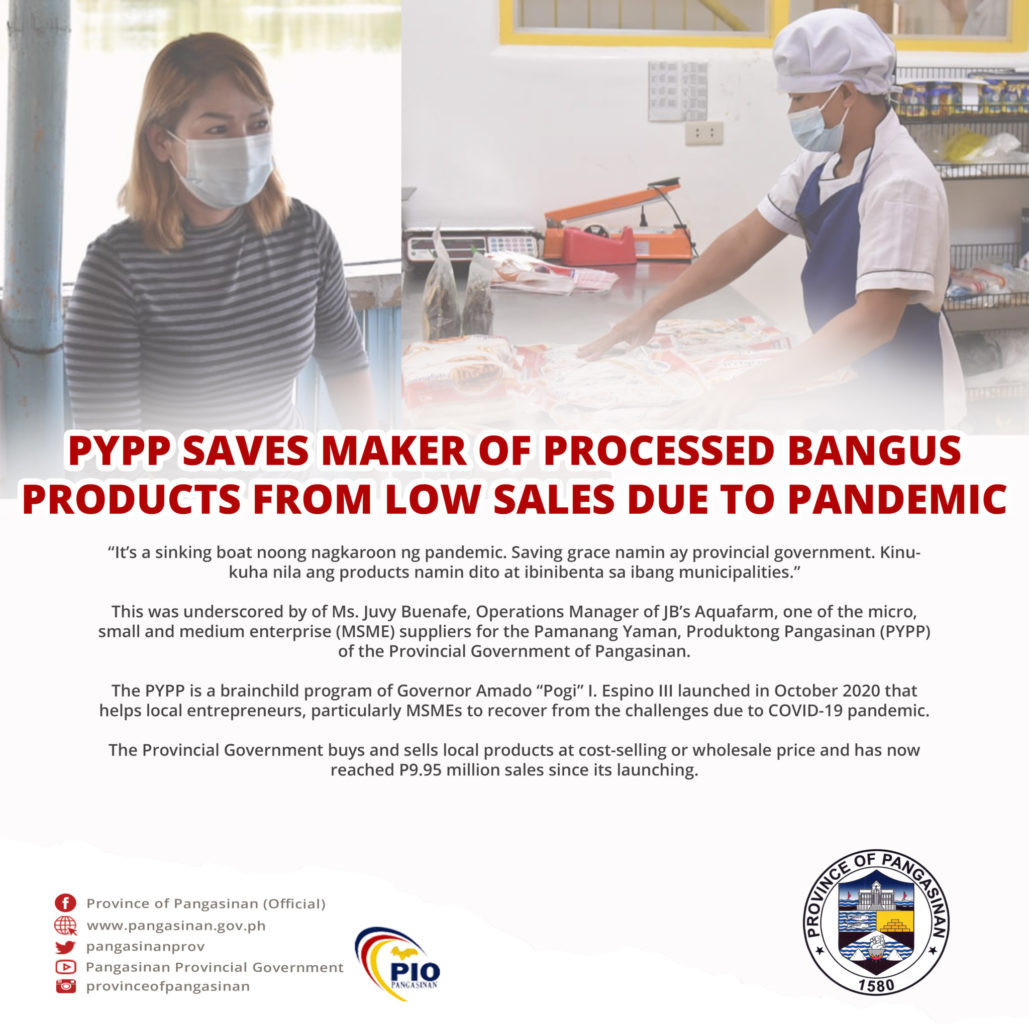 “It’s a sinking boat noong nagkaroon ng pandemic. Saving grace namin ay provincial government. Kinukuha nila ang products namin dito at ibinibenta sa ibang municipalities.”
This was underscored by of Ms. Juvy Buenafe, Operations Manager of JB’s Aquafarm, one of the micro, small and medium enterprise (MSME) suppliers for the Pamanang Yaman, Produktong Pangasinan (PYPP) of the Provincial Government of Pangasinan.
The PYPP is a brainchild program of Governor Amado “Pogi” I. Espino III launched in October 2020 that helps local entrepreneurs, particularly MSMEs to recover from the challenges due to COVID-19 pandemic.
The Provincial Government buys and sells local products at cost-selling or wholesale price and has now reached P9.95 million sales since its launching.
JB’s Aquafarm which now produces various bangus products was first established in 1989 as a family business and a part of a rural improvement club that assist local women in the town of Binmaley.
Among the bangus products sold are Shanghai, marinated, relleno, smoked, and sisig.
“My mom was thinking kung ano ang pwedeng itulong kaya nag-start ito as backyard processing,” said Ms. Buenafe in an interview on February 7 in her factory in Binmaley.
Despite the difficulties that the business face year-round especially during rainy season, Ms. Buenafe continues to innovate their products to support their 27 workers who handle the production of their goods.
Ms. Buenafe bared that their business receives more orders during its peak season including the months of January, March, April, and December.
During the pandemic, the JB’s Aquafarm faced more difficulties as their sales declined. The family business also has to lay off several employees in order for the business to continue.
“Nagkaroon talaga ng problema ang planta to the point na kailangan naming i-let go ang ilang staff to save the business. Ang mga product natin ay na-stuck. Nagkaroon ng problema sa transportation at marketing,” Ms. Buenafe said.
Ms. Buenafe thanked the intervention of the PYPP for saving their business amidst the pandemic wherein she mentioned that the Provincial Government also helped JB’s Aquafarm be recognized across the province.
According to her, the Provincial Population, Cooperative, and Livelihood Development Office (PPCLDO) reached out to market her goods through the PYPP Mobile Store to which she agreed.
“’Yon po talaga ang tumulong sa amin. Dito nakilala ang JB’s sa buong Pangasinan. Thankful kami dahil sila ang nagpupunta to every municipality at doon nila dinadala ang mga produkto namin,” said Ms. Buenafe.
The Operation’s Manager also disclosed that the PPCLDO buys products from them thrice-a-week which totals to P80,000 to P100,000 worth of products a month.
The JB’s Aquafarm is among the 50 MSME suppliers of the PYPP. Some MSMEs supply Pangasinan-made products including longganisa, tapa, tocino and other processed food; dried fish products such as daing; condiments like vinegar, bagoong, patis, and alamang; native snacks such as puto; chips, crackers, chicharon, and other preserved delicacies; and handicrafts such as clothes hamper, bags, and plant hangers.
/PJES