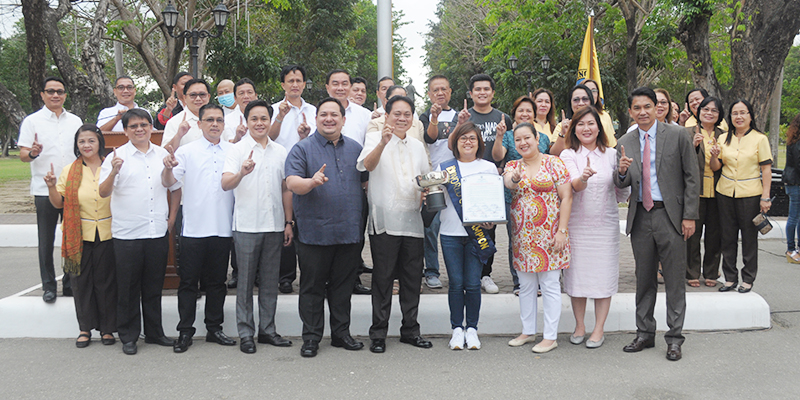 LINGAYEN, Pangasinan – The provincial government of Pangasinan celebrated the triumph of Krizziah Lyn B. Tabora, a Pangasinense, during the regular flag-raising ceremony at the Capitol Plaza on February 5 for winning the 53rd QubicaAMF Bowling World Cup Championship 2017.

Tabora, a 26-year-old native of Pangasinan has successfully represented the Philippines in the 53rd QubicaAMF Bowling World Cup 2017 held in Hermosillo, Mexico on November 11, 2017.

Delighted over the due regard shown by her fellow Pangasinenses, Tabora recounted her colorful journey before she reached her glorious days in the world championship.

Tabora was born in her mother’s town in Quezon City but his father is a Pangasinense. While she was born in Metro Manila, Tabora remarked that Pangasinan will always have a huge part of her success since his father, who inspired her to play bowling, is from Alcala, Pangasinan.

Youngest among the three siblings, Tabora infused the greatest interest in playing bowling and played her debut game in 2005 when was as young as 14 years old with her father’s guidance.

With ample love and passion for this sports event, Tabora plays bowling 2-3 hours daily. Meanwhile, her training as a member of the national team continues to intensify pegged to strengthen body conditions and as preparations for tournaments whenever possible.

It can be recalled that the Pangasinan provincial board headed by Vice Gov. Calimlim earlier commended Tabora during the regular session on January 15 for her ‘hardwork and tremendous efforts’ to outshine her foreign opponents and bring home the victory.