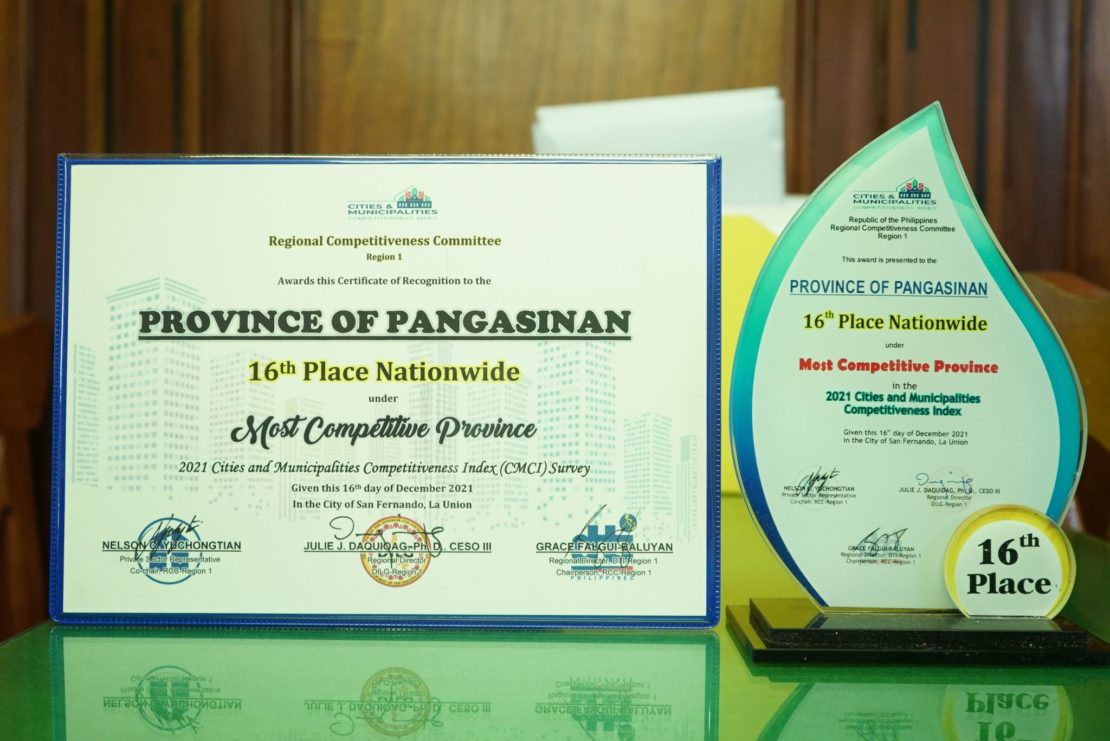 The Province of Pangasinan, under the leadership of Governor Amado “Pogi” I. Espino III, ranked 16th among the “National Top 20 of the Most Competitive Provinces” based on the 2021 Cities and Municipalities Competitiveness Index (CMCI) Survey.

There are 81 provinces in the country.

The CMCI of the Department of Trade and Industry (DTI) recognizes the efforts and performance of local government units in the five Competitiveness Pillars, namely: economic dynamism, government efficiency, infrastructure, resiliency, and innovation.

The commendation was earlier announced via FB Live on December 14 during the 9th Regional Competitiveness Summit,  while the Regional CMCI Awarding and Recognition Ceremony for Region 1 was held on February 8 simultaneously held in four venues.

In his video message, Gov. Espino expressed his gratitude to DTI-Region 1 and DTI-Pangasinan for this citation.

“Let me convey my sincerest gratitude and appreciation to the Department of Trade and Industry especially DTI-Region I and DTI-Pangasinan, headed by Regional Director Grace Falgui-Baluyan and Provincial Director Natalia Dalaten for recognizing the Province of Pangasinan as one of the top 20 of the Most Competitive Provinces nationwide,” said Gov. Espino.

The provincial chief executive also extolled various city and municipal LGUs in Pangasinan which have brought pride and honor to the province for their active participation to the CMCI.

“Congratulations to the city and municipal LGUs all over Region 1 that likewise made it to the top! Let’s continue to work together for the good of the province, and the region as well,” Gov. Espino added.