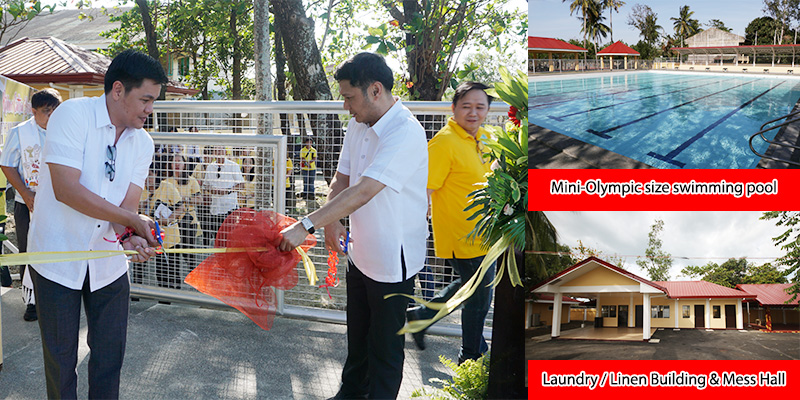 The provincial government allotted Php3.495 million for the rehabilitation of the mini Olympic-size swimming pool with length of 25 meters, while the rehabilitation of bleachers, shower and comfort rooms, and the fence surrounding the pool area incurred Php1.879 million. Construction cost of the laundry / linen building and mess hall is Php1.5 million.

In inaugurating another facility of the sprawling NRSCC, Governor Espino said the swimming pool, and other facilities will benefit sports enthusiasts in the province, particularly the young athletes who undergo training and conditioning at the sports complex.

Blessing was held prior to the ribbon cutting ceremony, which was attended by several provincial government department heads led by Provincial Administrator Nimrod S. Camba.

The NRSCC, a premiere sports facility in Northern Luzon, served as main playing venue of big sporting events like the Palarong Pambansa (in 1995 and in 2012), Philippine Athletics Track and Field Association (PATAFA) National Open in 2009, National Milo Olympics in 2011, Region I Athletics Association (RIAA) in 2013, among many others.

Part of strengthening further the youth and sports development thrust of the provincial government, Governor Espino gives priority to the major upgrading and facelift of the NRSCC.

The present provincial administration through the Provincial Sports Development and Management Council (PSDMC) also presents the Pangasinan Sports Academy — the backbone of the sustainable sports development thrust of the province — which will accommodate its first set of entrants by summer this year.

As of January, the PSDMC listed a total of 216 entrants to the sports academy, comprised of 169 athletes (16 year-old and below) and 47 coaches. The athletes were selected, taking credit of their track record and performance in various regional, national and international sporting events they competed in.