Pangasinan Governor Amado I. Espino III commended the Municipality of Mabini led by Mayor Ariel De Guzman for its continuous support to the Provincial Government programs and projects during the staging of Abig Pangasinan Karaban on June 3.

The provincial chief executive vowed to resume the programs and projects of the Provincial Government despite that pandemic that affected the entire globe.

Governor Espino also said that the Provincial Government is closely monitoring the situation of the province.

Renewing his call for patience and discipline, Governor Espino stated that through the unity of Pangasinenses, Provincial Government and local government units, the people of Pangasinan can overcome the effects of the pandemic in their lives.

For the second staging of the Abig Pangasinan Karaban in Mabini, the Provincial Government brought the caravan to Barangay Tagudin, bringing closer the comprehensive services to the residents.

To increase the income of local Pangasinense vendors, the Provincial Government purchased the products of 23 local vendors under the Kabuhayan Palengke Karaban. The purchased products are then brought to the 14 government-run hospitals of the province which will be served as meals to patients and medical front-liners.

Cash pay-out worth P400 was also received each by 15 members of the vulnerable sectors for the Karagdagang Pangkabuhayan or Cash-for-Work program. The program intends to provided additional financial aid to the vulnerable groups in exchange for their assistance during the Abig Pangasinan Karaban.

The Provincial Government team for Kalinisan Karaban Program collected a total of 358 kilos of plastic waste materials which were exchanged with rice and grocery at P20 per kilo. The Kalinisan Karaban encourages Pangasinenses to collect plastic wastes in their community promoting environment protection across the province.

Two units of grass cutters were also turned-over by the Provincial Government to Barangay Tagudin and Tagudin Elementary School in support to the environment protection program.

A total of 35 trays of farm-ready vegetable seedlings, 2,145 fruit tree seedlings, 13 waterpumps, 41 knapsack sprayers, and 10,000 tilapia fingerlings were also distributed among various farmers and fishermen associations to assist their livelihood in the midst of the pandemic.

Governor Espino also encouraged the residents of Mabini to support the programs of the Abig Pangasinan, especially the Abig Laman ed Barangay which provides free medical services to the residents.

Free medicines and vitamins were also distributed on the site.

Information desk for the Livelihood Assistance Program and Tulong sa Pagsasanay at Trabaho were set-up at the Karaban.

Mabini Mayor Ariel De Guzman said that the local government of Mabini is one with the Provincial Government, especially for its programs for agriculture and health.

Beneficiaries of the program commended the Provincial Government of Pangasinan for the innovative programs that were brought closer to their barangay. 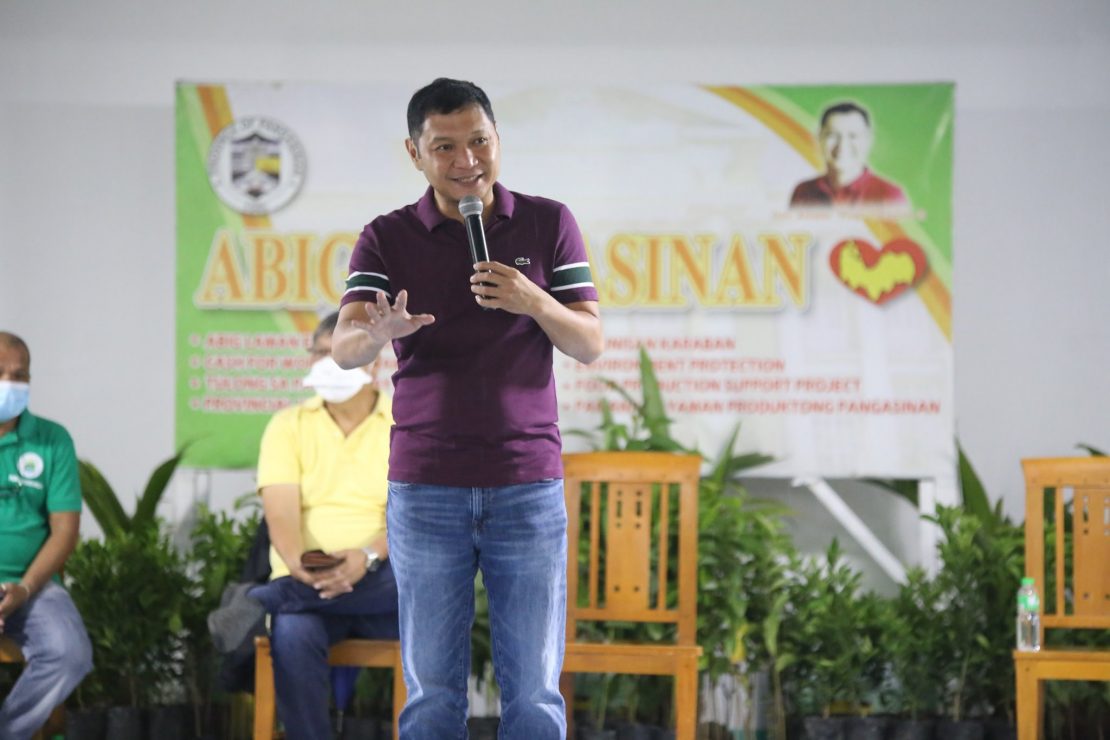